With a thumbtip flip, Surtch Pherther flicked the first ash cap from his maduro corona cigar. Half across that old highway bridge in the muggy fall night, he listened for its hit against the Crosscapes River, invisible in the dense dark, thirty feet down: Nothing. He listened for water shoosh-shoosh-shooshing through salt grass, snake grass, tamarisk, and willows. For ripples, he listened–but no: A flow without stones has no reason for that.

Wide water in a waste goes slow, bends big, is nigh on level with its ‘scape and would have you believe that it’s on the level too–but no: On sand alone, a river moves like a serpent, by stealth. It can pick your pocket, take your land, pluck your dreams like fruit, and it has the means to do the job and a place to hide the body. Give it a chance, and the desert river will steal your heart. 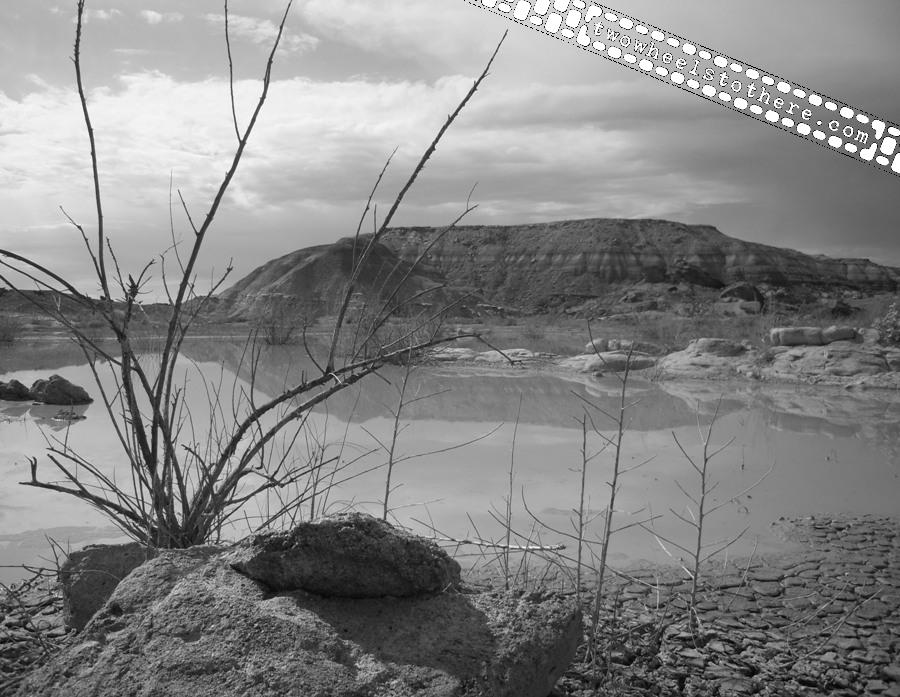 Surtch had checked in late that afternoon at Blakesville’s old Parker Motel, where a younger self and his kin had once snagged shuteye after a small hours, sixty mile, lonesome highway bicycle ride through the clayscape waste full of heat, skeeters, drizzle, and the push and pull of barreling rigs. They’d gotten spaced out, outta sight, and off in their own worlds, but regrouped late in a turnout for a thunderstorm’s blitz and boom of the scene–a worn timber corral nearby, the gnarled terrain beyond, and looming behind, the craggy Bucksaw Cliffs.

And all the while, from the first crank out of little Seeley’s town park at midnight to the last at the motel many hours down the road, that younger self had been tuned in to Enigma’s debut album loud on auto reverse continuous on the Walkman clipped at his hip. Man, what a trip that had been. 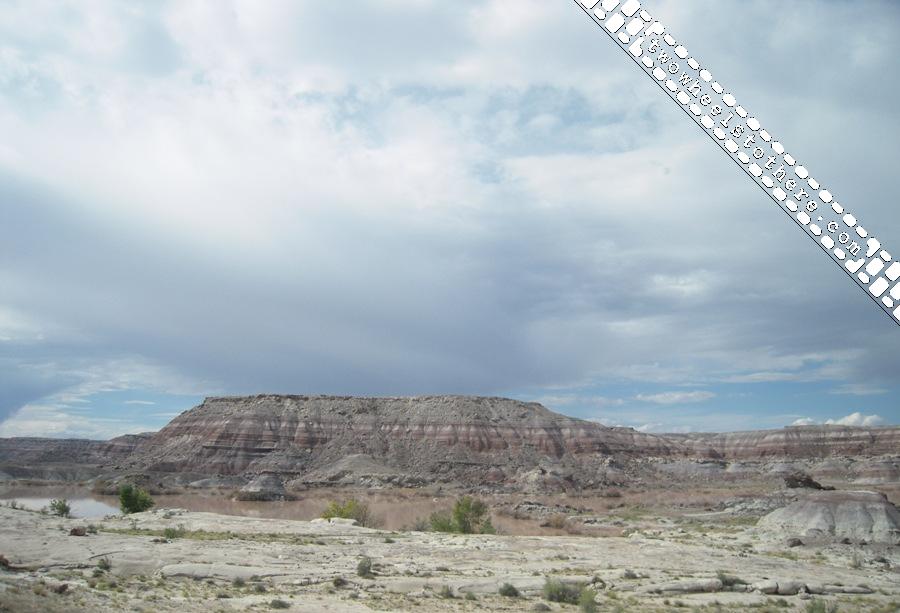 From a hot shower linger, Surtch–combed, brushed, free of the dirt-riding dust of the day–had walked out early that evening to stalk dinner. Not a block down he came upon a newly painted, old cafe with a roadside sign still wearing the name of some past venture, something only relative fortune or irrational confidence could change. “Well,” he said, “what the hell,” and his entry was announced with a screech from the dull chrome door.

Almost acrobatically, a wiry, little guy sprang from the kitchen. “Welcome! Villa Rica Restaurante! Pleece. Seat. Drink?” Eager to convey what his broken English might not, he held a grin on his face and a menu out from his side, presenting–like a spectacle–his place of specters: the burgundy, bombproof carpet with Atomic Age starbursts in gold; rain-stained popcorn ceiling like surf from the ocean blue walls; wagon wheel chandeliers, right for the town, but wrong for the times; mottled blue counter spottily worn down to kraft paper brown by decades of diners gone by; and every place set, and Surtch the only customer.

“Um, coffee please,” and he slid into a front booth with taped-up seats and with views of the old highway main drag, the overcast lowering like a stage curtain before the setting sun, and the west end of Blakesville. 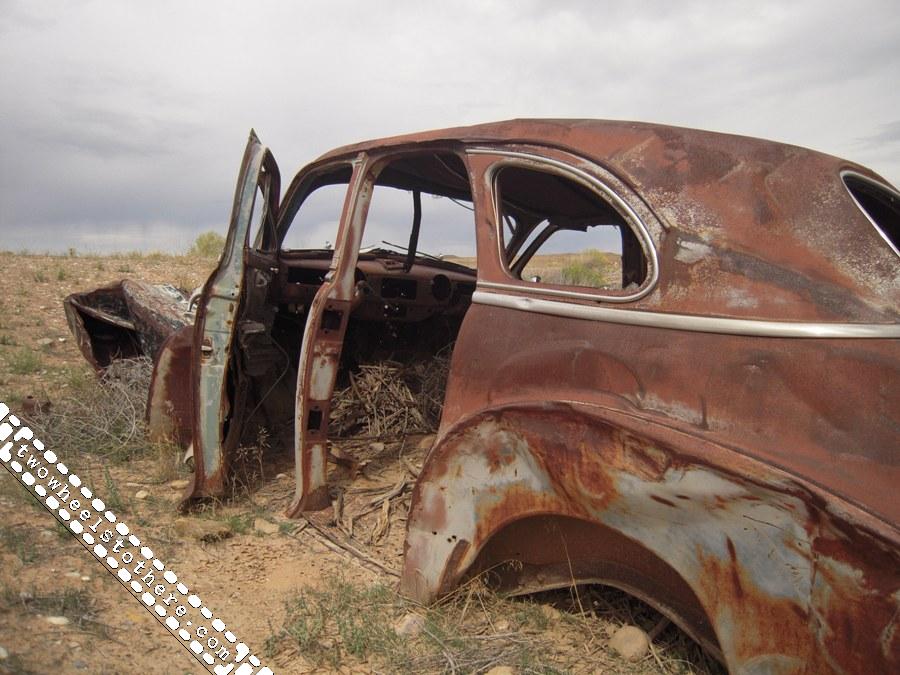 Born a way station way back when at a wide river ferrying site for folks and things on the move, and come of age with the railroad boom, but left on the platform when the hub was switched, little Blakesville now bore, in boarded-up motels and expired eateries, the scars of a brief, postwar uranium boom, sixty-odd years back. Adding insult to injury, it was soon thereafter bypassed like a blown fuse by the interstate and all that came–or went–with it.

Now only where ramps tied it to traffic at both far ends was there any semblance of prosperity, in branded gas stations and fast-food joints, just more spots on the system to get the same old shit between untold heres and theres. It was like Blakesville was being forced to hold its breath, to wait—for rebirth, or its last gasp. 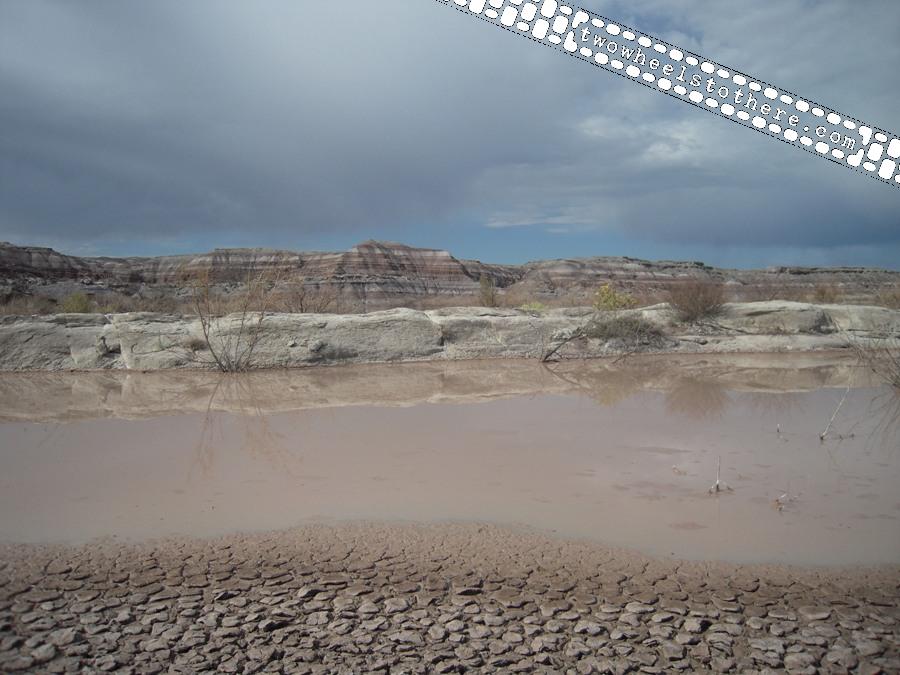 With the final shred of tortilla, Surtch wiped his plate clean of beans and rice and the fajitas’ spicy sauce, popped in that pinch and tossed back the lukewarm last of his second cup, paid up and swapped thank yous with wiry, little guy, and with a screech from the dull chrome door fairly bidding him well, returned to the sidewalk and into the evening that had meanwhile gone dim. 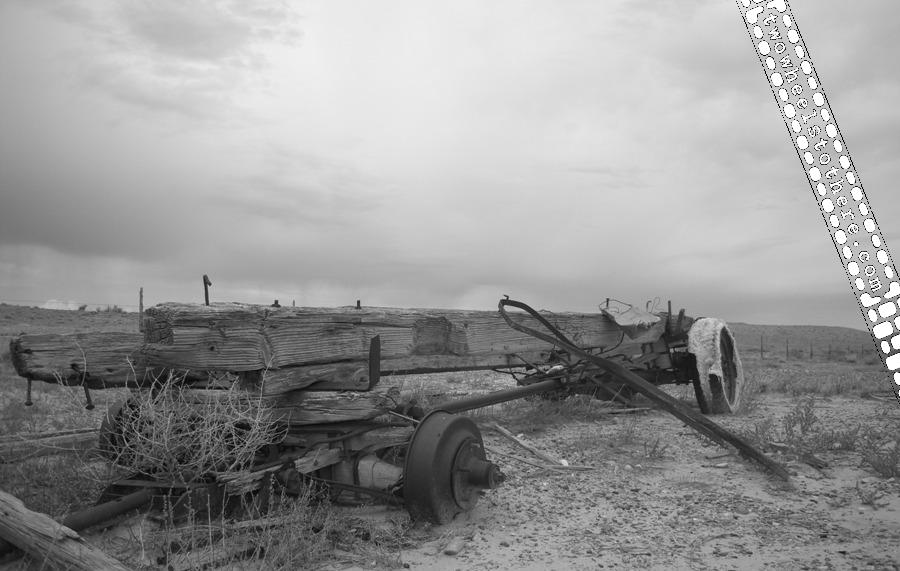 He’d unburdened Escape Artist upon arriving that afternoon, leaving its top case in his room with the full fuel cans like a bomb wanting a spark, so it took him but a second to soften the spring, gear up, start up, butt-bounce the rear just for fun, and twist from the lot and onto the old highway main drag, hardly checking for traffic, but minding his speed ’cause if Blakesville was especially hungry for one thing, it was revenue from throttle-happy travelers. 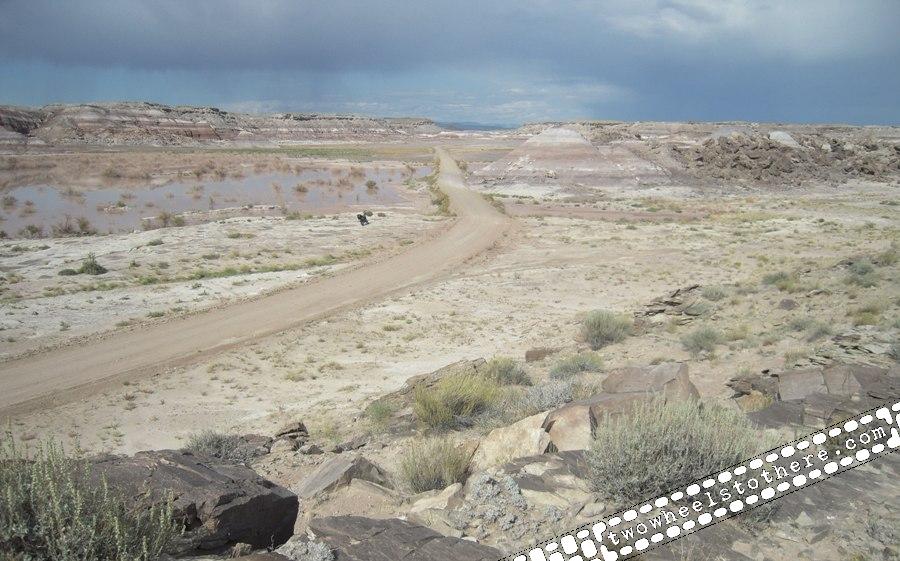 On the far side of an east-of-town mound that left him in the dark on the decaying old highway frontage road, Surtch cranked it up, keeping his peepers peeled for pronghorn out to broadside him from the blue and fling him roadside, broken and bruised–until about three miles out, where he rolled off the gas, swung under a crumbling overpass, and struck off on a desert dirt road that fled further into the black.

Aside from precious nothing, the only things for a while within reach of Escape Artist’s slight light were road grader leavings, scattered rabbit- and sage-brush, and here and there huddles of scheming tumbleweeds. Soon pale bluffs emerged left and right, looking like ruins and appearing dead at first glance–too dry for life, too barren for hope–but no: Vigorous they were, fragile but hardy, vulnerable but resilient, quietly vital. And that’s the desert in a nutshell–a paradox. 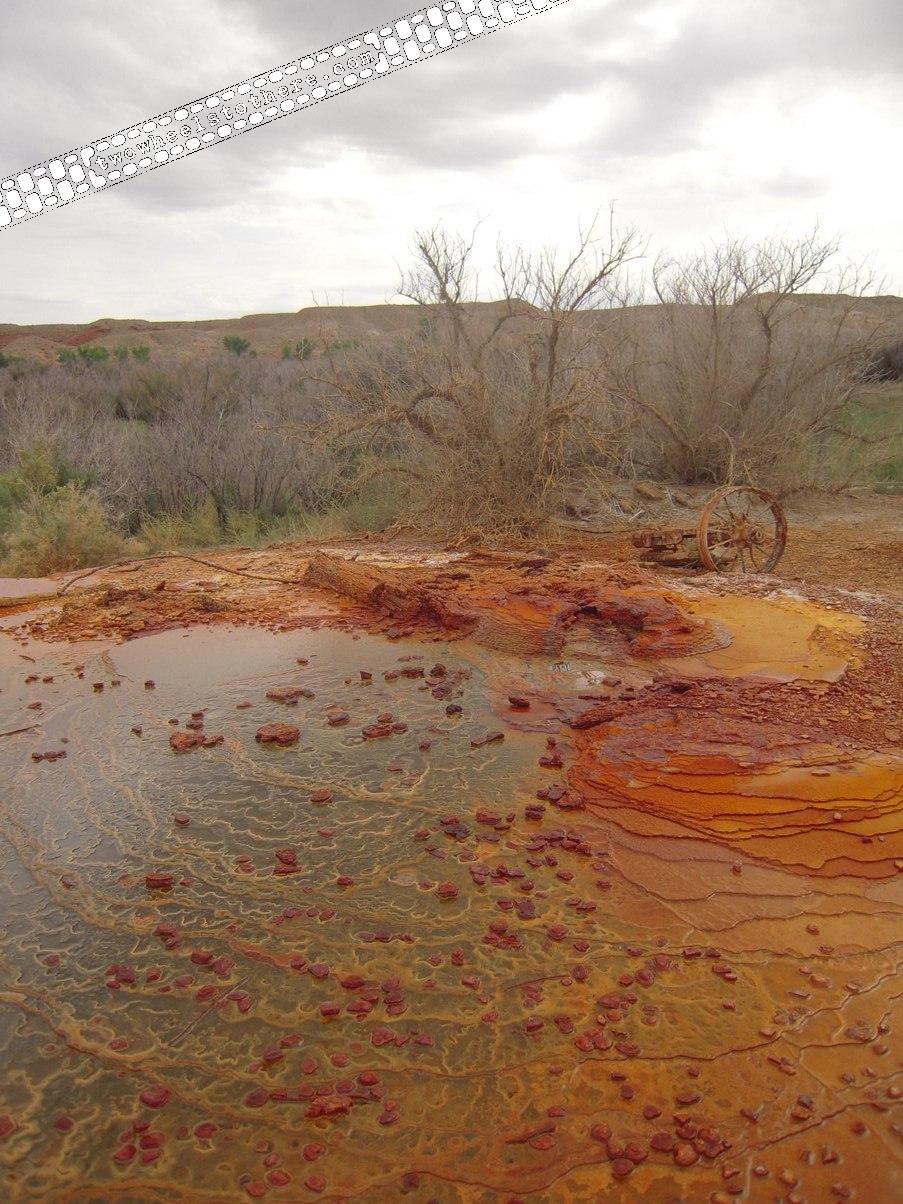 Down a snaky draw the road dove, teasing the wash with parallel runs, shoulder bumps, and pointless crossings, while from heaps and boulders Escape Artist’s light conjured shadows, raising them to monsters tall and twitchy across the terrain and driving them off all the same, until–abruptly–the bluffs receded and the draw dwindled, the shadow play ceased for want of a source, and the road just stopped. There was a small, tracked-out flat, a wet mound of travertine, and the open wellhead pipe from a prewar oil bore. It was Codd-Bottle Geyser, and all they’d struck was club soda: carbon dioxide-propelled groundwater.

To Surtch, it seemed like odd geology for a petroleum prospect, but what did he know? In the sandstone labyrinth down the Crosscapes from Blakesville–far by flow or sand, but a wink as the crow flies–were many such geysers. Of course, those had been sunk with water in mind, by ranchers and by sand settlers supposedly taking root with riverside cultivation of gardens and melons and–believe it or not–peaches. Really, though, it was the Roaring Twenties, Prohibition era in the US, and most of those so-called homesteaders were just lawless desert rats–off their rockers, out in the wastes, lost in the maze, down in the sheer-walled canyon shade, brewin’ hooch.

Surtch imagined himself kickin’ back with a cactus quill toothpick twiddlin’ ‘tween his lips in a scrub oak-shrouded alcove with its seam seep quenching critters and small ferns and traveling songbirds–moonshining with the rest of ’em, bootlegging maybe with the best of ’em. 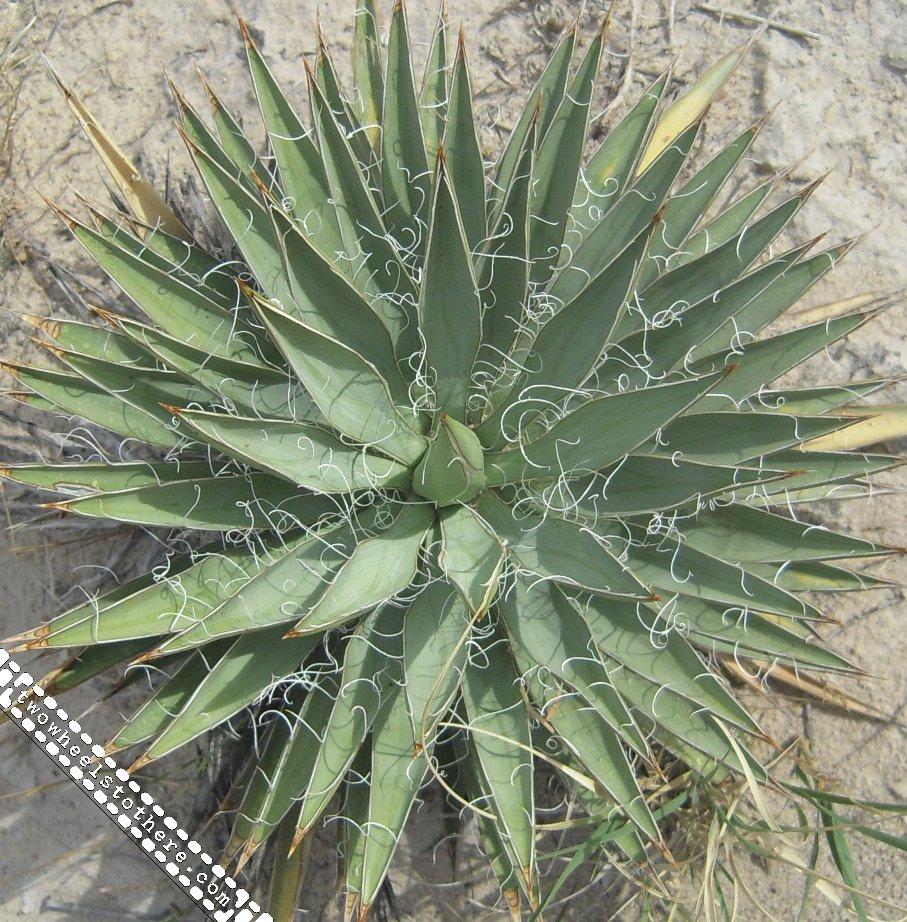 Patient Escape Artist idled in neutral while its slight light dissolved in the dark, like damp in the dry, above where the Crosscapes moved by stealth, twenty feet out, ten feet down, and for what it’s worth, over seven hundred miles long.

Surtch might have shut it down and let the night wash over him, might have waited for his sight to catch up, might have alighted to drift in the dark, might have listened to Codd-Bottle blow, might have lain still on the sand to be more aware, might have pushed through the brush and the riverside reeds, and might have crouched on the crumbly bank, straining to hear the wide water’s whispers, begging to know its wisdom, and pleading to keep its secrets. He might have tried to endear himself to it as he’d tried with every desert river since the Johnsie stole his heart when he was just a little boy.

Yeah–were it not for campers in a Vee-Dub pop-top overnighting near the geyser, he might have. But they’d stirred at his arrival and stayed anxious about his presence, so around he turned to return to town. And that likely was for the best anyway: Love of a desert river can be a smothering thing. 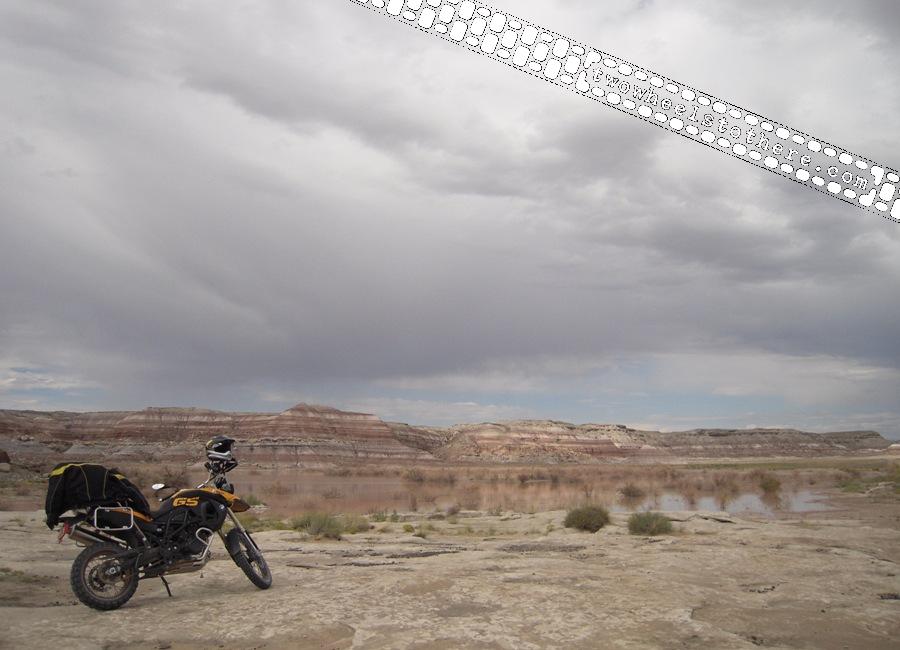 The full fuel cans he’d left like a bomb wanting a spark had not meanwhile rubbled his room and inflamed the Parker Motel, so Surtch–adding foolishness to recklessness as though two such negatives might mathemagically make a positive–planned to leave them there overnight. Onto the bed he tossed his gear, into his rear pocket he stuffed his wallet, and out the door he set off on foot to the Zephyr Truck Stop, mid town, to gather the next day’s breakfast and lunch.

Along the old highway main drag stood many streetlamps, too few lit, and the town was home to far more crickets than it deserved. Where lots remained wild, the temperature dropped, and through Russian olive hedges a few campfires flickered afar in the Crosscapes River State Park. In a night that would have been young for a city, Blakesville was all but dormant.

Three kids with bicycles goofed and gabbed in the town park pavilion across the road–Surtch could hear them, but not what they said–and when they noticed him, they hushed, watched, and then vanished into the shadows. Seconds later, a deputy drove slowly through town, the only car in the scene right then, and Surtch was left feeling criminal for no reason. 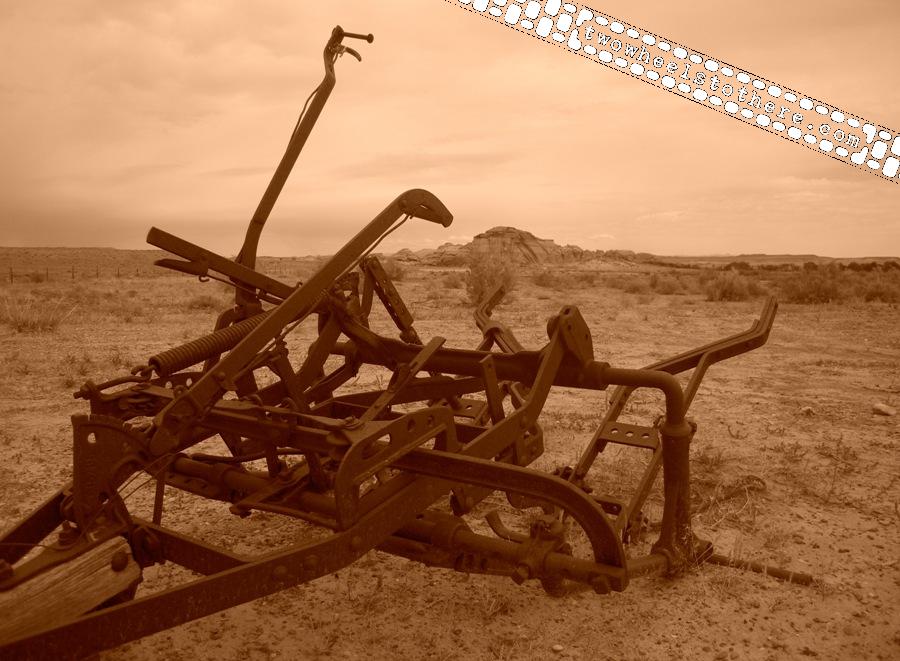 At the Zephyr he grabbed granola bars and some jerky, a Gatorade, a banana, a small milk, two cereal cups, and he plucked a plastic spoon from a bin near the chili and cheese dispensers and the wiener rollers. He also snagged a cold beer–one of those cheap, pale lagers in a twenty-four ounce can ’cause that was precisely the kind that a Blakesville station would sell: The town simply wouldn’t have tolerated anything remotely highfalutin. 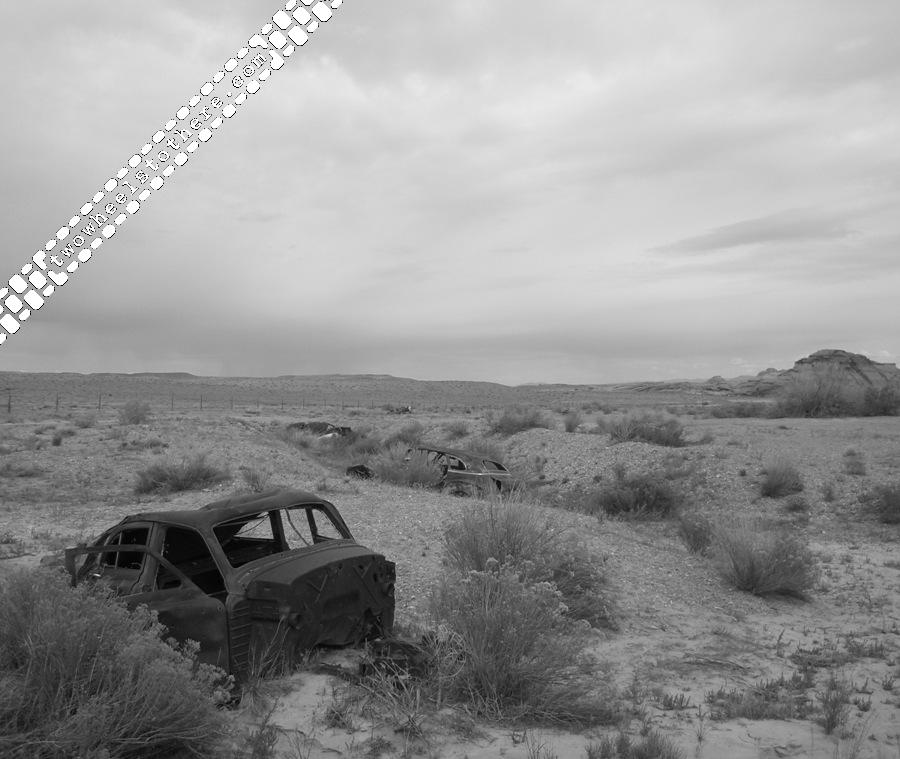 Back half across that old highway bridge in the muggy fall night, Surtch Pherther–groceries warming at his feet, maduro corona cigar smoldering not an inch from his pinch, and brain abuzzin’–dragged once more for the last time and then flipped the hot butt far out and listened for its hit against the Crosscapes River, invisible in the dense dark, thirty feet down: Nothing.

Feeling a bit less criminal-for-no-reason with a grocery bag in hand, he would stroll back to his room at Blakesville’s old Parker Motel and, later, nod off fully dressed, sprawled across the bed–an empty on the nightstand, Cartoon Network on the TV, and during the small hours, drizzles outside.