A co-worker of mine often asks me for “sophisticated, wild-assed” guesses on work-related matters, and the results he receives are always more wild-assed than sophisticated… 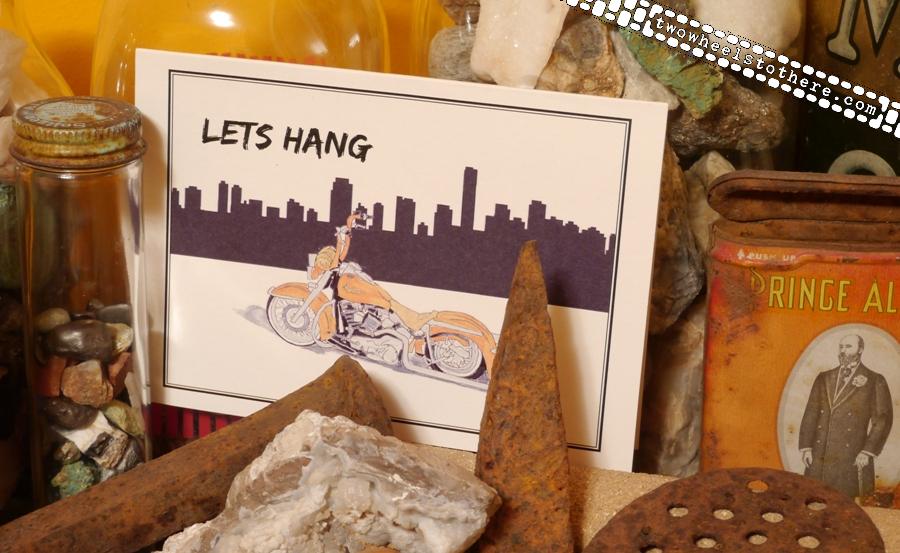 A while back The Experimental Ghost presented a contest in his blog post Shall We Play A Game, challenging his readers to guess his name, which had been shrouded in mystery along with his visage, which remains shrouded in his helmet. As an incentive for the correct guess, Ghost offered a mighty fine, motorcycle-themed bounty from his pal Dan at Daily Bikers.

Reluctant to participate (as I revere the liberating ways of pseudonyms, alter egos, and third person protagonists), I was content to simply observe the goings-on. Well, for a while I was content. Ultimately, I relented–tossing my hat into the ring, analyzing the clues I found… 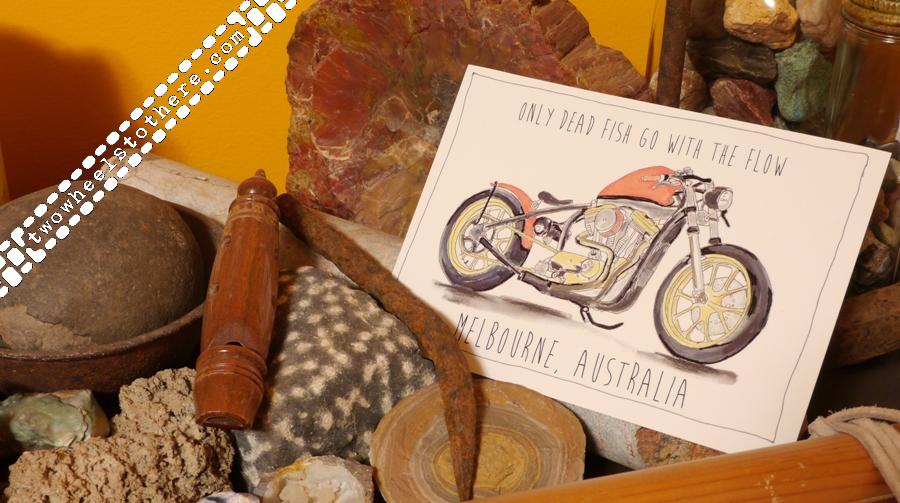 As with my workplace guesses, my guess of “Adam” was far more wild-assed than sophisticated, for I altogether missed The Ghost’s most informative clue, hidden in the link for the one and only photograph in the post. (D’oh!)

Thanks again, Adam, for the bit of fun that your contest generated for observers and participants alike. And thank you, Daily Bikers, for the delightful, motorcycle-themed goodies: They’ll be enjoyed by me and by the other bike-lovers in my life. 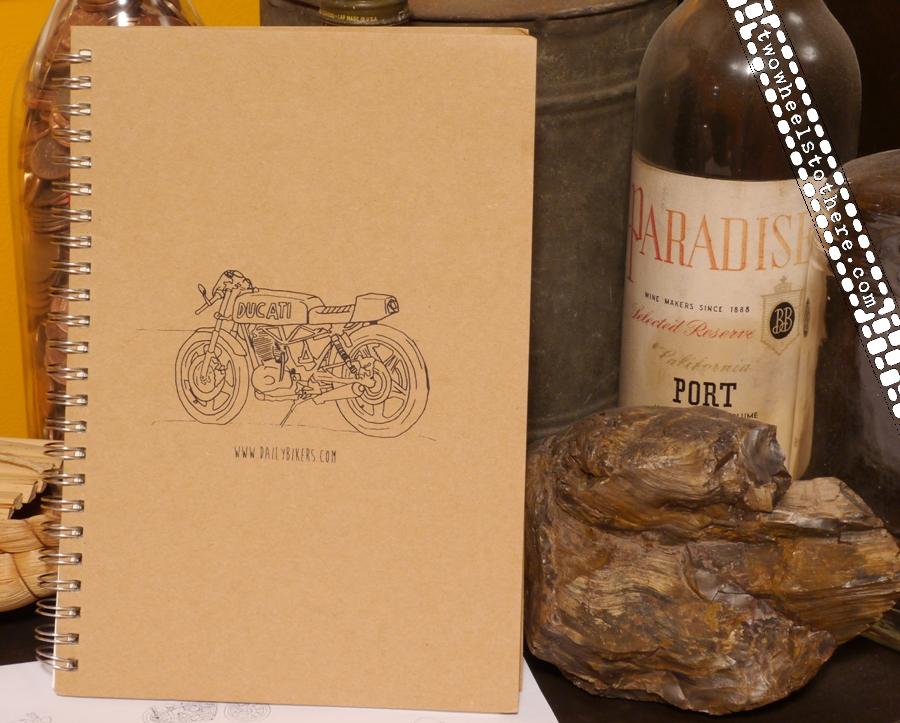 Oh, and as for the Australian Motorcyclist magazine that you sneaked into the parcel: There’s nothing like such glossy publications to feed one’s dreams of riding exotic locations, so thank you, Adam… Yeah, thanks a lot. 😉 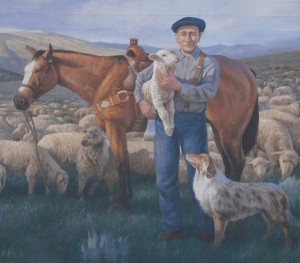 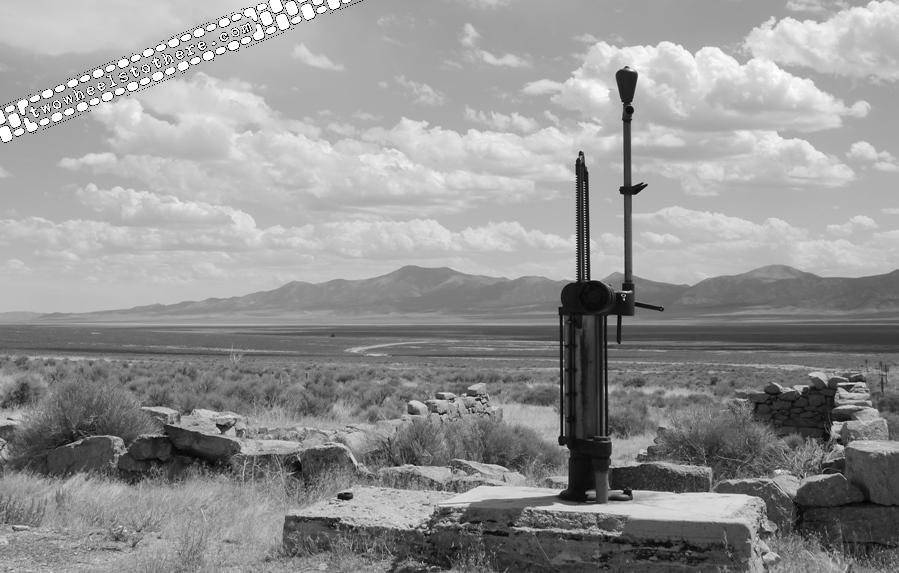 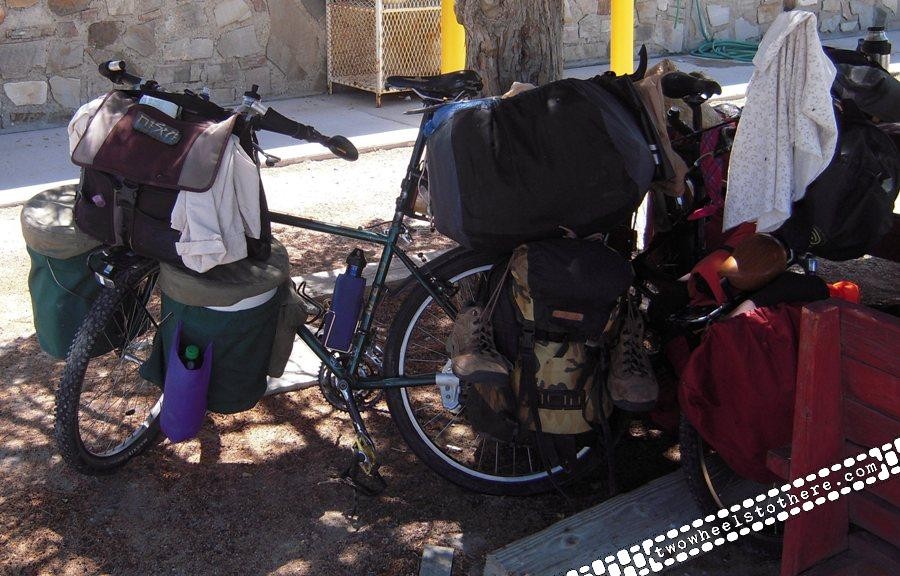 Kronos slowly swallows Thysia… As it has for over a century, so it will–indefinitely? Thysia, the town the Kronos Mine bore, peopled by the miners who sustain Kronos, the miners that Kronos sustains. If not for history, the telling of truth might be lost to the tailings of time: Thysia doesn’t stand in its first footprints. Indeed, over the over-a-century, it has been displaced at least once, is where it hadn’t been. And where it was–as it was–is no more, has been either excavated or entombed. Given another hundred, Thysia mightn’t be where it is, and where it is mightn’t be.

They are an ouroboros of treasure booms and busts; an amalgam ouroboros–Kronos heads the Thysia tail, and the miners course as blood; an ouroboros not of hopeful infinitude, but of insatiety, which is want, presumed need, and a grain of greed at least; an ouroboros likely to swallow itself to its tightest possible constriction… Then what? 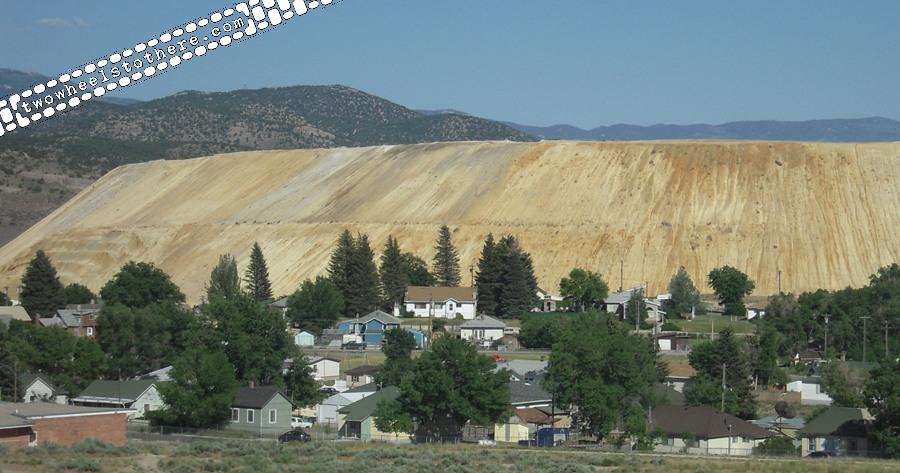 Surtch Pherther straddled Escape Artist parked on a rise outside of town and safely opposite the Kronos tali while through Thysia sped a jacked pickup, its stereo blaring, “But it was not your fault, but mine. And it was your heart on the line. I really fucked it up this time. Didn’t I, my dear? Didn’t I, my dear?”

Surtch wanted to control time: not to usher its passing, for that would be unfair to others aboard this absurd conveyance, but to slow his own so that he could witness ad infinitum Kronos’s consumption. For witnesses, however broadly “witness” can be defined; witnesses not as judges; witnesses impartial and incorruptible… Dammit, there MUST be witnesses! Otherwise, there is no possible testimony. 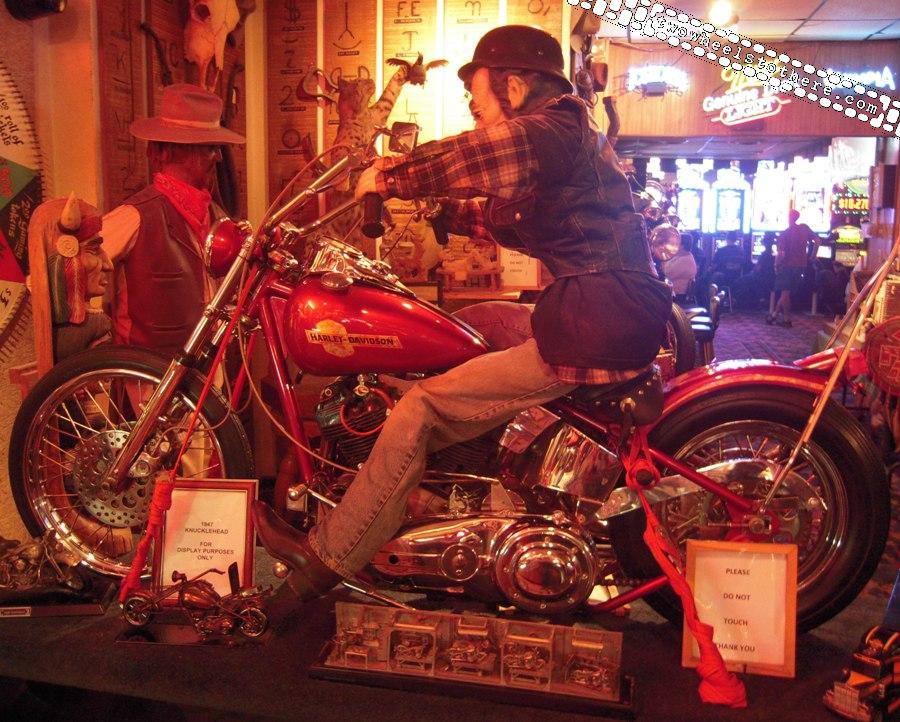 The sun lowered on the drama, and Surtch turned over Escape Artist and rode off, returned to high desert Saxton for Chinese food and then to the Saxton Hotel for an amber ale, reclined on a warm and quiet twilit bench on the sidewalk for a slow cigar, retired to the tub in his room for a late, hot bath with a cold Guinness and then, finally, to bed for rest. Outside, Saxton was still; up the canyon, Thysia surely was still; but Kronos… Kronos was hungry, and slowly, ever so slowly, it continued to eat. 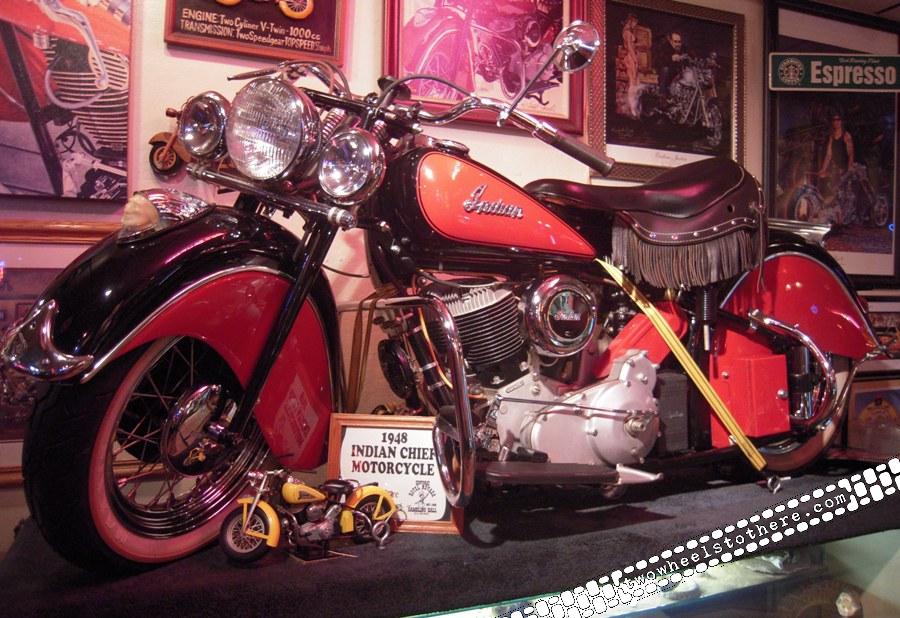 With his right grip fore and his left grip back a few, engineer Harry pumped the levers in unison once, twice, thrice, paused, and then pushed and held them in like a conviction. A low whirr led to a short rev and then–KA-WHUMP–the 70-year-old diesel-electric rolled coal to the roof and chug-chug-chugged thunderously to life, shimmy-swaying like a quaking drunk. Surtch Pherther’s jaw dropped. It was thrilling, but suddenly he wanted to get the hell off that stirring beast. He clutched Harry’s hand, shook involuntarily, thanked him for everything, and then jittered down the nearest ladder and watched from terra firma as Harry drove out for the noon tour… 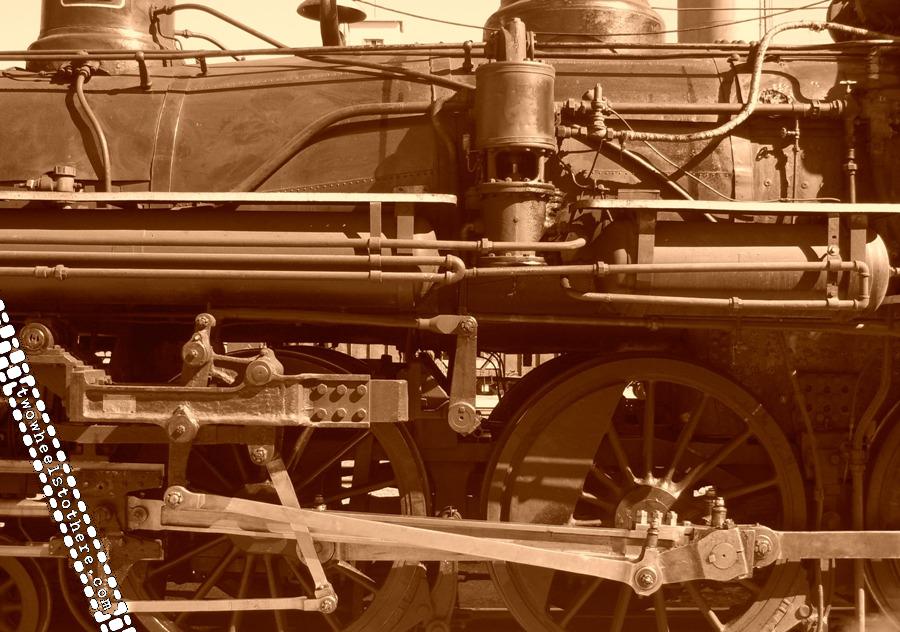 Surtch had landed in Culbert at the posted speed that morning after low-flying at 90 the final forty-five miles. He’d been worried about missing his appointment. It turned out, having not figured for timezone hop, he’d arrived about an hour early, so he wandered the sleepy few streets of the old smelting- turned ranching-town. Finally, after some pleasant hours with curator Dan at the cute Culbert Museum, Surtch had eagerly headed for the old Saxton Depot and Railyard, fifteen miles on. 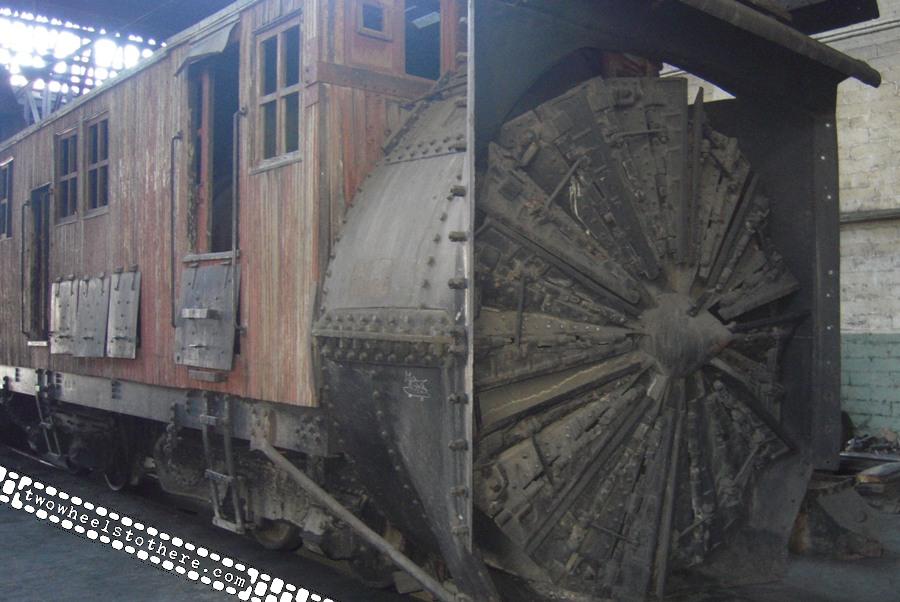 He’d been solo-strolling the engine house for a while when Harry had approached and said, “Come, I’ll show you my favorites”. They bypassed three locomotives–two working, one wanting–for a wrecking crane and a rotary snowplow, all steam and from the early 1900s; in a forge at the back, they gaped at a great pneumatic hammer, yet another mechanical monster in the railyard’s little land of giants; and they discussed Saxton’s evolution from mining bust-town to rail tourism and how the City of Contradictions and its outliers North DeLusiville and Witt have their own similar pasts. 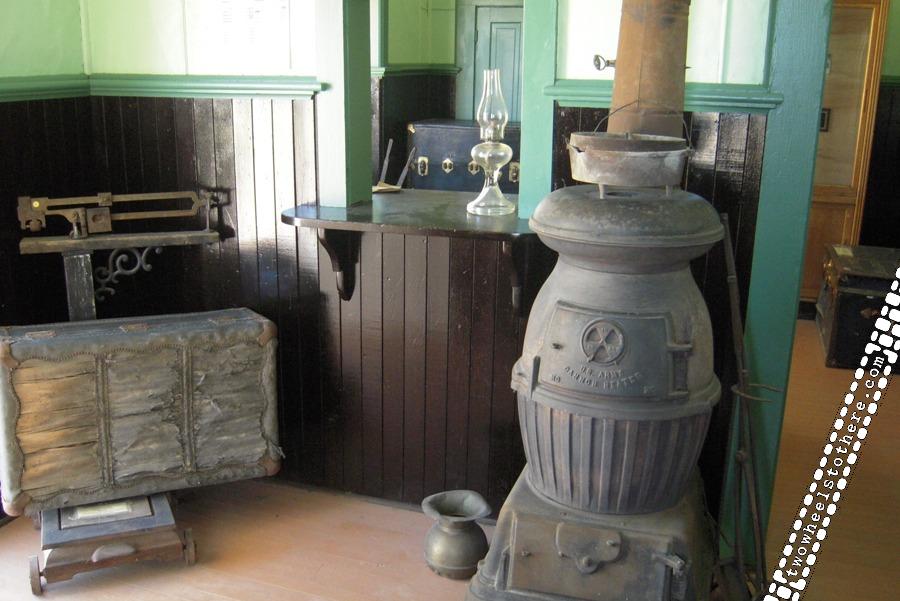 After the depot and following a brief stop at the charming regional hodgepodge of the County Museum in Saxton, Surtch was drooping from the early start, the long ride, the full day, and the heating afternoon, so he hit the nearest gas station for drinks. In the lot he met a Cadillac Texan who momentarily marveled that the F800’s twin wasn’t a single, “though that’d be a helluva single”, and then went on about crazy Europeans who were supercharging Triumph Rocket Threes so that “no mere mortal could knee-clench those torpedo-cruisers”. 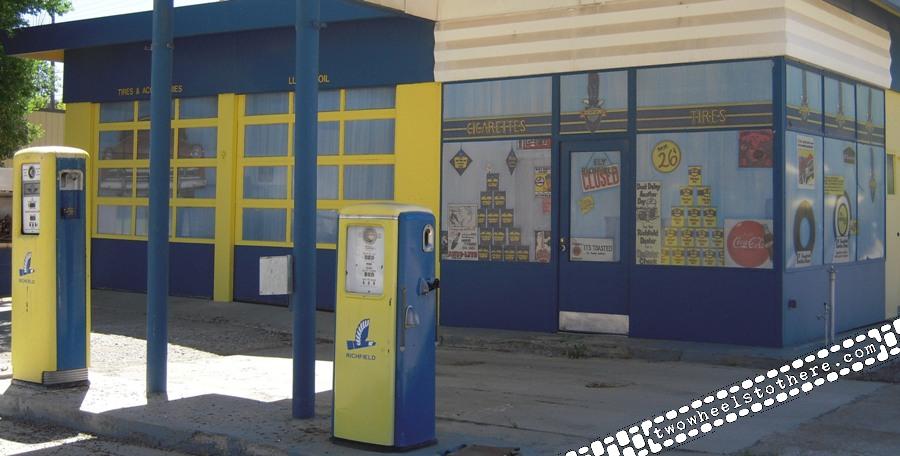 Grabbing a Gatorade for refreshment and a Coke for a fix, Surtch rolled down to Saxton’s big city park, unusually green for the desert and delightfully bordered with ancient Cottonwoods. He took a shaded spot just as a group of bagpipers walked in and began playing.

It was surreal: From dawn in little, middle-of-nowhere Aridia, where he’d downed coffee and breakfast beneath a casino’s e-marquee flashing “Extreme Midget Wrestling!”, to the time machine railyard and his excitement on the waking locomotive, to a dozen bagpiping pros practicing in the park in small, desert town Saxton… He was tempted to think, smugly, “only here, in my corner of the world,” but he knew that wouldn’t have been true. And Surtch was grateful for that.